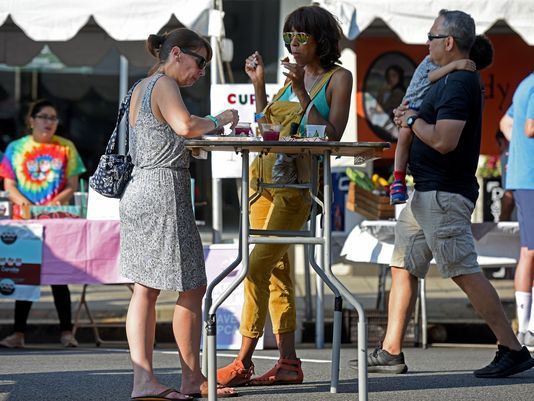 Bonnie Kraft of Tenafly and Anna Segelbacher of Teaneck sample the offerings of the Englewood Night Market on Tuesday.  (Photo: Amy Newman/NorthJersey.com)

ENGLEWOOD — Hundreds braved the hot late-afternoon sun Tuesday to try new foods and get a look at local businesses at the annual Englewood Night Market.

Local vendors, food trucks and entertainment lined East Palisade Avenue between Van Brunt and Engle streets as attendees moved along the road, sometimes seeking shelter in the shadow of food trucks to get out of the sun.

"It's hot, but it's festive," Paula Fonder said.

Performers from bergenPAC's production of "West Side Story" opened the festivities with performances from the show, which is playing Aug. 4-6, including "Gee, Officer Krupke" and a choreographed dance.

A former Englewood resident — now hailing from Upper Saddle River — Fonder said she was glad to see all the different foods on display as she sampled some Korean cuisine. Many people don't often get the chance to try out new foods, she said. 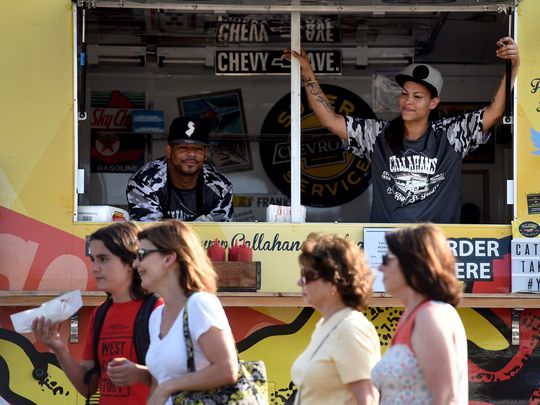 Organized by the Englewood Chamber of Commerce and sponsored by The Record and NorthJersey.com, the event drew many from neighboring towns who had learned about it online or in the newspaper.

More than 25 local vendors turned out for the event, alongside service and volunteer organizations.

As she ate an empanada, Eleanore Woodruff of Weehawken said the event was worth the 45-minute ride. She likened it to the Taste of Weehawken street fair.

"It's a great event, and it's great to get people outside and walking around," she said.

Despite the heat, the crowd grew into the evening, coming to try the variety of food and music, and some partook of the cold drinks and frozen treats offered as samples to cool off and enjoy the time.

"It's a nice break for the people once in a while," said Sharon Grosso of Totowa, adding that it was nice of the city to offer free parking for the event.

The diversity of the businesses represented was cheered by several residents.

"This night market brings out the spices of life that make our city and our country what it is," said Chris Gagliardi, an Englewood resident who attends every year.

With the multicultural nature of Englewood and its downtown — Indian, Hispanic and other nationalities are represented in the shops and restaurants along Palisade Avenue — an event like the Night Market serves to help bring the city together, Englewood resident Manuel Chica said.

"If we can integrate all the community, it's really good," he said. "Activities like this integrate the community, and we can know each other, meet people and maybe be more proactive and help the economy of the town."